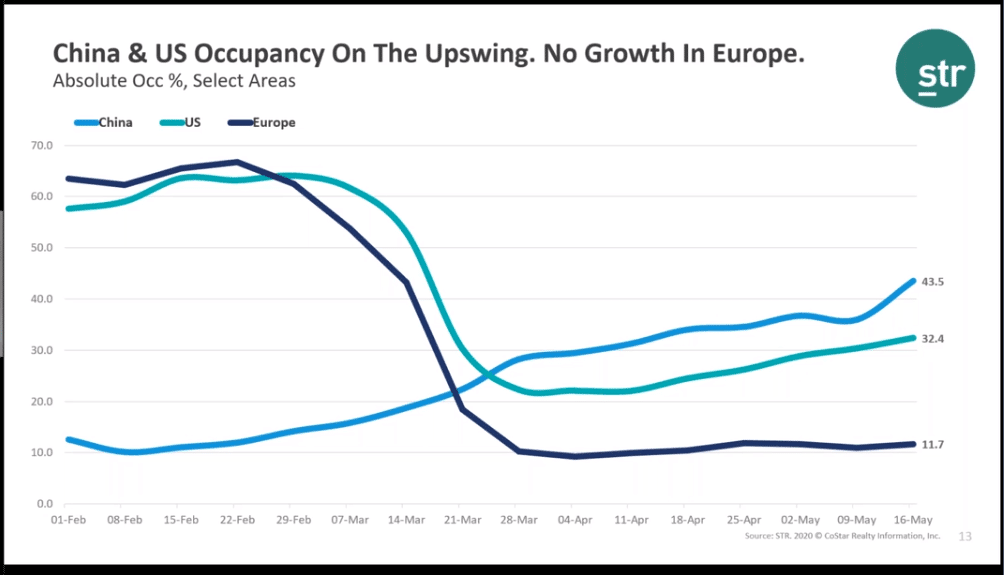 The following article is trying to outline a hotel market update and trends for the upcoming months.

However, according to STR, Europe indicates a slower recovery pace compared to the US and China.

We expect that in Q3 the Greek market most probably will follow a similar or even higher occupancy level. A lot will depend on flights schedule, air fares and travel restrictions from each country.

Ryanair intends to carry out 50% of the planned itineraries to Greece. The initial planning provided for 440 routes per week. Right now it is predicted that 234 routes will be operated in July. The company will have flights to all popular Greek destinations: Athens, Thessaloniki, Heraklion, Chania, Corfu, Rhodes, Kos, Santorini, Cephalonia, Kalamata. Furthermore, Air France will operate three flights on 1st of June to reach eleven on the 22nd.

Volotea and Wizz Air have informed that they will add the following routes for the summer 2020, exact dates to be announced.

Travel continues to be restricted from several airports within the EU and abroad. You can see the full list on EASA site. Athens and Thessaloniki airports are ready to welcome travelers on the 15th of June and all other Greek airports on 1st of July. Following our last article, we monitor again some air fares which seems to be kept relatively low.

Athens to Mykonos round trip 28 Jul to 31 Jul starting from 60 euro. This is considered to be quite low, indicating low demand.

Zurich to Mykonos round trip 12 Aug to 21 Aug starting from 226 euro. This is also considered to be quite low, indicating low demand.

Hotel market update continues with terms of bookings.
During the recovery period of COVID-19, we observe that major stakeholders (Hotels, Air carriers) have applied and highlight flexible booking conditions. For example, Aegean airline has adjusted the Hold My Booking feature. Now travelers can pre-book and hold a flight ticket without paying anything for 14 days ahead.

In addition, online travel agents such as Booking and Expedia are highly promoting properties that apply flexible reservation conditions. Booking has added an extra filter that allows travelers to see and select only properties with flexible policies. Another trend that we have witnessed on both Booking and Expedia is that both don’t promote anymore the cheapest rate but the most flexible one. Bookings shows first the flexible rate even if it’s more expensive than non-refundable.